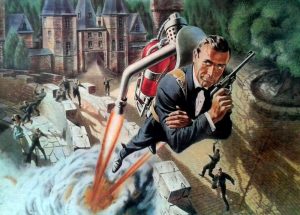 The glamorous 007 films which started in the 1960s delighted and surprised audiences with ‘licenced to kill’ James Bond getting out of all sorts of scrapes in almost unbelievable ways.  The film Thunderball was no exception, as before the opening credits ran, Bond was being pursued on foot by the baddies, he was trapped at the top of a castle and it looked like this time he was foxed.  But no, seemingly appearing out of nowhere 007 puts on a rocket-belt and jets straight up in the air over the top of the building where a glamorous brunette was waiting with Bond’s Aston Martin car coasting in neutral.  Bond swiftly shrugs off the jet pack and stuffs it into the boot and off they drive, leaving the villains with only their heads to scratch in confusion.    The inventions were always on the cutting edge in the Bond films, but unlike the promotional pictures, the jet pack did not appear to be made out of a fire extinguisher. The real rocket-belt actually did exist.  It was built by Bell Hydrosystems  and they called it the  “man-rocket”.  Powered using hydrogen peroxide as fuel, it was even tested by the US army, but with a flying time of only around 20 seconds it was mothballed.   It looks likely that the only input from an actual fire extinguisher in the film Thunderball was from the sound department, which was dubbed over the film to create the noise of the flying jet pack.

We recommend that you only use a fire extinguisher to put out a fire and not try to use it as a jet-propelled aircraft.  For all your fire safety needs including fire extinguishers and alarms contact us at Bath & West Fire & Safety.