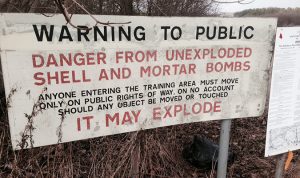 As this unprecedented dry weather continues and our green and pleasant land turns to brown and crunchy, the troops based on Salisbury Plain have had to change their training schedule. There have been several fires reported on the Plain after live fire training drills, so for the moment gas will replace live fire in a bid to keep sparks to a minimum.

The armed services have been based in the Warminster area since 1898. Salisbury Plain stretches on a chalk plateau on an area covering 300 miles and is home to one of the most famous landmarks in the world – Stonehenge. But around half of The Plain is used by the military though and is closed to the public for safety reasons. The military areas on Salisbury Plain create difficulties for fire control. Many of it is inaccessible for the fire safety services to put out any fires and even spraying water from the air can be fraught with difficulties. After several weeks of smoke emanating from The Plain and with the local population frustrated at having to keep their doors and windows closed during some of the hottest days this year so far, now with the absence of live fire the townsfolk are bound to be breathing a collective fresh air sigh of relief.

For all your fire safety needs including fire alarms, extinguishers, fire blankets, fire risk assessments and fire safety training for your staff contact our staff at Bath & West Fire & Safety.