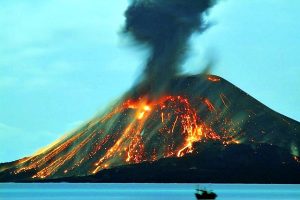 The tsunami and earthquakes that have rocked Indonesia recently have created misery and panic for this country’s inhabitants and the rest of the world has witnessed as the rescue services have battled against the force of nature.

But for the Indonesians these recent events should have come as no surprise. Indonesia is situated at the meeting of three continental plates: Pacific, the Eurasian and the Indo-Australian, and the much smaller Philippine plate, which means that as far as risks go, Indonesia is the most likely to be affected by the violent movement of the earth’s plates, in fact, around 90% of earthquakes occur within this area called ‘the ring of fire’.

One of the most notorious islands in Indonesia’s some 18,000 archipelago is the island of Krakatoa, famous for one of the most violent volcanic eruption recorded in history in 1883 which claimed over 37,000 lives in the eruption and resulting tsunami. The volcano today has an active life where clouds of smoke can be witnessed, as well as more dramatic rumbles and showers of fire. The last being very recently and on over 40 occasions in 2018, the area is under constant monitor by scientists.

The Indonesians have challenges to live with, and in these times, whenever a natural disaster occurs this creates its own problems. The infrastructure of urban living means that electrical cables can become firelighters, the water system can become a deadly river, motorways collapse as well as buildings which can be a nightmare for the rescue services and logistics in terms of rescue and aid.

Airports and seaports are given priority for repair, and slowly systems will be re-built to give these wonderful islands the recovery they need. For all your fire safety needs including installation and maintenance of fire alarms, smoke alarms, extinguishers, fire blankets, fire risk assessments and fire safety training for your staff contact us at Bath & West Fire & Safety.